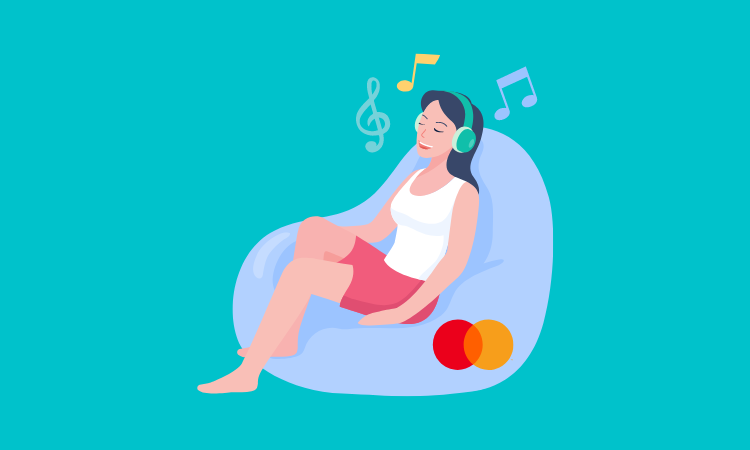 Last month, Mastercard released an album containing ten songs – each integrating its sonic brand, which it published back in 2019. The album is called Priceless and was first made available on Spotify.

The Mastercard-minted sound is integrated into the album pretty subtly as far as sounds go; if you have trouble spotting it, listen to Michael Rice sing tu-du-du-du-du in the first seconds of the first song, ‘Gotta Go Dancing’, then have a listen to the first few seconds of the ninth and tenth songs – ‘Live Loud’ and ‘Conversations’. The album cover, meanwhile, reflects Mastercard’s visual logo, applied to two window-like frames bursting with grass.

“As we continue to build the equivalent of our visual brand logo and design system in the audio space, our album creates a significant moment for us to connect to people in a fun, culturally relevant way,” said Raja Rajamannar, Mastercard’s chief marketing and communications officer.

To release the album, Mastercard worked with Beatclub, a marketplace founded by producer Timbaland which helps music creators connect with record labels and music publishers, among others. As part of the deal, Mastercard is purchasing hundreds of one-year memberships and offering them to creators who are part of disenfranchised communities.

Mastercard first released its sound back in 2019, as part of its efforts to adjust its brand to a more digital-first environment. Before coming up with a sonic brand, for example, the company removed the word ‘mastercard’ from the logo so that it could work better ‘across the digital landscape,’ according to its site.

The release of this album has been about emphasizing Mastercard’s presence as a global brand that values diversity through its unique sound.

“We partnered with emerging global talent who span a variety of cultures, languages, and genres — this core element of the album’s identity makes it relevant to people of all diverse cultures,” said Rajamannar.

But whether or not its sonic brand alone has been effective in reflecting the personality Mastercard wants to portray remains questionable. According to Dominic Burnham, a sonic branding consultant at Sydney-based Resonance Sonic Branding, there seems to be a bit of a rift between the sound Mastercard has produced and the rest of the brand assets that define it.

“You can think of sonic branding as a way of getting to the soul and the essence of the brand, [asking ourselves] what are we [looking to say] about it through sound,” said Burnham. “And in [Mastercard’s case], I don’t know what the soul of the brand or the brand essence of Mastercard is. And if it is that kind of chirpy positive feeling – and that’s what the sonic or the audio logo does for me – [then the question is], is that Mastercard? For me, I don’t know. That’s not what the brand says to me otherwise.”

But the challenge that Mastercard is facing in bringing its sound to life is one that many companies are dealing with.

“I think one of those issues that brands have is that you can create this amazing asset but then there’s a lag between talking about it and it actually becoming part of someone’s life and someone’s interactions,” said Burnham.

Mastercard’s decision to create an album could, then, be a way to further zero in on the brand image Mastercard wants to emit – one that’s young, hip, and technology-forward.

Why does this matter?

Other card companies have been diving into sonic branding waters.

American Express recently adjusted its own sonic brand to be heard when people pay for stuff. Visa also has a sonic brand which it released back in 2017.

Consumers’ payment behavior is becoming more contactless – which means less looking at the card in use. That means payment companies need to make sure they’re still being noticed – if not seen, then at least heard.

It also may just be a wise step to take as we continue to step into a more sound-based environment. For example, earlier this year, Whatsapp reported that people are sending seven billion voice messages a day. Meanwhile, around 60% of consumers say they listen to podcasts, which could also signal a preference for ears over eyes.

In short, if card companies can find a way to create a sound existence through sonic branding, they could potentially get a whole new sense to embed themselves within and, at the very least, escape the wrath of ‘out of sight, out of mind.’

0 comments on “Mastercard drops an album – but why?”