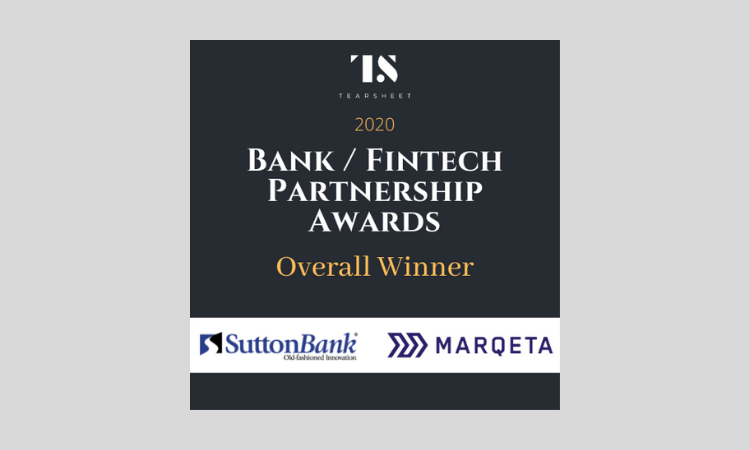 We’re continuing to celebrate the winners of 2020’s Bank / Fintech Partnership Awards. Up today are our overall winners — two firms that changed significantly directly from the nature of their partnership that was struck almost 10 years ago. We have Tony Gorrell, CEO of Sutton Bank, a 130 year old bank in Ohio, and Omri Dahan, chief revenue officer of Marqeta, a leader in modern card issuance.

I’ll let them describe the nature of their partnership and how they modeled a collaboration that has become a paradigm for today’s best bank/fintech collaborations.

The genesis of the partnership

Omri Dahan, Marqeta: In order to operate in payments and the financial services ecosystem, you can’t just be a software company. You can’t just come up with a good idea and bring it to market. You need to connect with the financial ecosystem and infrastructure. When we went to go build a card product in 2011, we understood you needed a network logo on that card, someone to print the plastic, and a bank to issue the card. There was a lot of change around who could issue cards at the time.

We talked to Visa, Mastercard, and Discover. Discover gave us our start and gave us a list of 8 issuing banks to talk to. We talked to all of them and they said what we wanted to do sounded crazy. They said no thank you — we aren’t going to work with you. We went back to Discover and literally in the hallway, someone said we should speak to Sutton Bank in Ohio.

We got on a plane and lo and behold, there was a real openness and willingness to talk to a bunch of payment innovators out of Silicon Valley. The personal chemistry was really strong. They liked what we wanted to do. The rest was history.

Tony Gorrell, Sutton Bank: We had been at this for a number of years running some programs. We didn’t have a presence out west, especially in Silicon Valley. That was the initial yes to talk to the team at Marqeta. As we start to meet the team, we saw some synergy and energy. We thought, why not? What’s the downside other than time and some money. So, we said let’s try it.

Omri Dahan, Marqeta: It was like trying to do something when you don’t have a blueprint to follow. We tried plugging in pieces here and there. In November 2011, we launched our first beta card program. The first email went out after the product had been tested. We were on the phone with the folks at Sutton, watching the screens, seeing if the transactions would go through. They did. At the time, the strategy wasn’t as clear as it was today. It was a good six to nine months to get it all working the way we wanted to.

When we moved to an enterprise, B2B strategy in 2013, we had to take that nine month process and come up with a way to scale that. Instead of doing one program in nine months, we could do one every two months and eventually shorten that time. Now, we do up to six programs in a given month. That transition was a lot of work and the type of work Tony and I have been doing over the past few years.

Tony Gorrell, Sutton Bank: For us, we’ve always had a history of thinking a little bit differently. We have this thing called a bank charter and we don’t take that lightly. Yes, we’re going to support our communities but we were thinking about what else we could do with the charter. It was entrepreneurial.

When we met Marqeta, they were similar culturally. They were entrepreneurial too and could shift gears when they needed to. For us, it’s all about the story. We knew we needed to diversify our revenues. If we wanted to support our communities in Ohio, we knew we needed to do something else in order to ensure our survival.

The makings of a good partnership

Omri Dahan, Marqeta: The word is ‘culture’. I’ve always marveled at the last several years of innovation in fintech and payments. Many people don’t understand how this is all based upon working together between cultures of mostly midwestern banks, who have been at this a long time and who know the ins and outs of the regulations better than anyone out west and in New York. I learned that you can ignore that at your peril.

You must understand that intricacies and nuances of financial services and payments as well as folks like Tony and his team. If you think moving quickly and breaking things is going to work in payments, it might break your company. You need to be able to speak the same language and have an inquiry mindset — go to Ohio and have dinner with your bank partner and learn what keeps them up at night. It’s all about culture, relationships, and being able to slow down or speed up in ways that make both parties uncomfortable. And that’s OK, as long as the relationship is strong.

Insights from the partnership

When you scale, everything gets more serious. At the levels, we’re talking about now, not only is Tony and his business on the line, we have millions of cardholders that rely on us for things like groceries and medicine. That’s an incredibly sobering responsibility. There’s not a lot of room for ever. Whatever differences a rural bank in Ohio and a Silicon Valley startup have — they’re just dwarfed by the sense of deep responsibility we both have around serving our customers. That’s just super important.

Where Credit’s Due Ep. 7: Uncovering fraud in financial services with LexisNexis and Javelin Strategy & Research