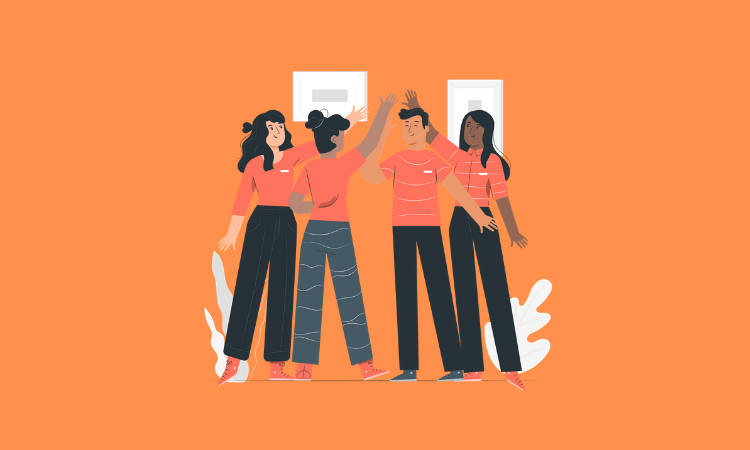 Throughout their lives, LGBTQ+ members experience difficulties around their finances, as social exclusion and discrimination affect every aspect of their lives.

While the community has made significant strides in terms of legislative freedoms, things are still far from equitable – especially from a financial standpoint.

The number of Americans identifying as LGBTQ+ grew to 7.1% of the total population at the beginning of 2022, or double the rate reported in 2012 – making them the fastest-growing minority group in the United States.

Minority groups in the US often get left behind by traditional financial services, and the queer community is no different – studies show that 30% of LGBTQ+ adults experience discrimination or exclusion from financial services.

The size and potential of this sector is significant and growing in importance – estimates suggest that it has a collective annual spending power of $3.9 trillion and that it could represent up to 10% of the global population.

Despite recent inroads made towards more LGBTQ+ rights, sponsoring annual Pride events, and backing campaigns, we have not seen solid gains for LGBTQ+ inclusion within the financial world.

This means that there are fewer options for the community when seeking banking, credit, healthcare, insurance, employment, housing, and other financial services. This causes them to turn to less effective, more expensive, and niche solutions that cost extra time, vigilance, and money.

“The community is provided fewer choices and less access to banking services, healthcare options, and credit needed to prosper in life, and especially needed now on the hard road of pandemic recovery,” said Myles Meyers, founder and CEO of Superbia Services, an LGBTQ-focused financial services organization.

Moreover, studies also found that LGBTQ+ folks are less likely to have disability or critical care insurance, a will or estate plan, or even a mortgage or retirement account.

Additionally, CNBC research shows that a same-sex couple is 73% more likely to be denied a mortgage than an opposite-sex couple. Nearly 40% of LGBTQ+ respondents in a recent study said the quality of their financial lives has turned out worse than they expected.

Almost half of the study's respondents said that someone in the financial services industry had discriminated against them, and 44% attributed their lack of financial security to that discrimination.

Members of the queer community are more likely than straight people to face poverty and economic hardship. Most queer-friendly states like California, Colorado, Illinois, Massachusetts, and New York, for example, have a higher cost of living with the sexual orientation/gender identity wage gap, which results in significant financial pressure on the queer community.

People who don’t conform to norms of gender and sexuality are also less likely to have savings or checking accounts, which makes everyday transactions more expensive for them.

Even prior to the pandemic, more than 1 in 5 LGBTQ+ adults in the United States lived in poverty, compared with 16% of cisgender straight adults. The economic data further differs across sexual orientation, gender, and race, with the poverty rates for Black and Asian LGBTQ+ adults being higher – and the pandemic making those numbers worse.

“If we can reduce the mental health impacts of financial stress, it gives us the opportunity to be a little bit more stable when it comes to dealing with some of the attacks we're currently dealing with,” said David and John, who run The Debt Free Guys blog and Queer Money podcast to provide financial advice and tools to the LGBTQ+ community.

The lack of representation in traditional finance

The financial services industry, like other industries, has evolved over time, and so has its relationship with LGBTQ+ clients and employees – from accelerating the adoption of digital technology to understanding the need for new capabilities and a more diverse workforce and inclusive workplace cultures. Incumbent financial services providers such as Bank of America and Citi are at the forefront of setting LGBTQ+ representation goals and addressing issues of inclusion and outreach.

Bank of America offers domestic partner benefits and initiated the inclusion of sexual orientation in its non-discrimination policies. It was also one of the first Wall Street institutions to cover employees’ medical expenses for the gender transition process.

Beyond the support from a handful of institutions and visible corporate backing, the traditional financial sector continues to fall short of full inclusion, leaving a major portion of LGBTQ+ people currently underserved.

The queer community urges the sector to be more inclusive in the marketing of its products and services – they feel that the ‘perfect American dream’ retirement brochure with a straight white couple walking a golden retriever down the beach doesn't resonate with everyone.

“The financial service needs for our community are rarely unique to our orientation or identity but have become unique as a result of systemic barriers. The combination creates a confusing, uninviting, or sometimes hostile environment that community members experience when engaging with traditional providers of financial services. And it's why community members can be hesitant to seek out solutions, with nearly 60% believing traditional providers ‘don’t want to help people like me’,” added Superbia's Myles Meyers.

Even where there may be an inclination to align with the community, traditional financial providers may not deliver on it. During Pride 2022, insurance company State Farm retracted its community program within hours after an online uproar from conservative groups, which marked the end of a year-old relationship of support for the LGBTQ+ community.

Diversity begins with an individual customer’s name. Before all else, the queer community asks financial institutions to upgrade their processes for identifying customers and alter the ways people are identified across their banking relationships.

Instead of assuming what LGBTQ+ customers want, the financial sector should reconsider how they interact with non-binary individuals and come up with questions addressing their unique needs, such as, "How can we make this product or service more relatable for you?", according to Queer Money’s David and John.

To counter the barriers to advancement in inclusion and relatability, queer people are calling on a more diverse culture in the corporate and financial services sectors that hires more LGBTQ+ employees, women, people of color, and those from diverse religious backgrounds.

A well-managed diverse workforce would reduce costs and generate greater revenue: companies that employ a diverse workforce have 35% higher financial returns than national averages, according to a McKinsey report.

Because the LGBTQ+ community has had to focus more on survival than wealth-building for a number of years, the latter is a relatively new area for them to explore.

A study found that 44% of queer people were as likely to have a crypto wallet as a retirement account and many other financial products. This shows how there exists an interest in the community to engage with finance but with a level of anonymity, which can be assumed to mean less judgment.

“Our advice for years is to start talking about money simply. Get the courage to bring the money conversation up with other LGBTQ friends or family. Find and use resources that are gender identity/sexual orientation agnostic, such as fintech and robo-advisors. The next is to do whatever's necessary to find an employer that offers a 401(k) and ideally contribute between 12% to 15% to their 401(k). Lastly, do whatever's necessary to find a queer or queer-friendly financial advisor or planner to create a long-term financial plan,” advised Queer Money’s David and John.

Despite having a collective buying power of nearly $3.9 trillion, queer Americans are less likely than the overall population to use financial tools like retirement savings and estate plans.

Many older folks are left out of generational assets such as a family home or a financial inheritance either from a trust or life insurance as a result of various systemic reasons and a lack of financial education, among others.

“We have a term we use called 'legacy financial exclusion'. This includes not getting any financial support from mom and dad, from help buying a first home to paying for a wedding. These compound just the same as interest does and it adds up,” Queer Money’s David and John told Tearsheet.

Going forward, in addition to providing an inclusive environment, financial services providers, banks, and insurance firms can assess and address these other barriers in order to make meaningful progress in minimizing the economic data gap between queer folks and the average population.

Policymakers need a new approach to narrow the financial inclusion gap by advancing LGBTQ+ equality. That will require proactively promoting a progressive agenda to enact policies and programs that protect the LGBTQ+ community, increase diversity, and open doors of opportunity for their financial independence, according to Superbia’s Myles Meyers.