‘Innovation labs never connect back’: How USAA is building innovation into its core 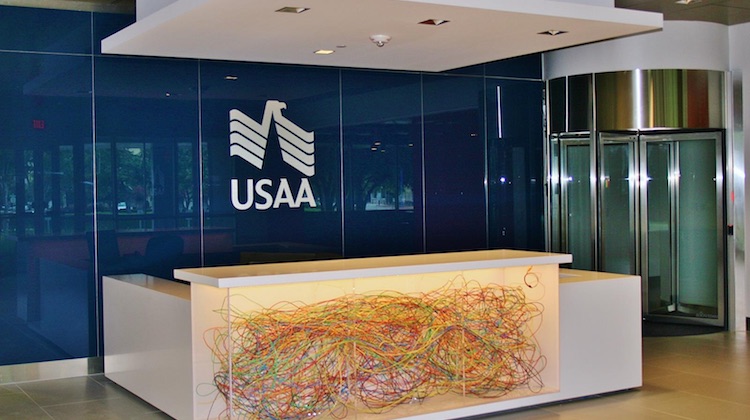 At the San Antonio, Texas-based bank for military veterans and families, creating a culture of innovation means encouraging every employee to come up with ideas for innovation — even if they don’t work on the innovation, digital or technology teams. Anyone can contribute ideas, according to Zack Gipson, USAA’s chief innovation officer — and he and his team don’t judge them.

“A lot of innovation programs judge ‘is that innovation or not?’ — come on, innovation is anything that’s different and adds value,” he said. “So we don’t judge ideas. We let employees vote ideas through the pipeline and if employees love it and it helps improve how we serve members, why wouldn’t we do it?”

Last year, around 1,000 of 32,000 USAA employees submitted ideas, but almost 94 percent of employees participated by voting ideas up the pipeline. The bank pushed more than 1,200 of them from lab to market. USAA is not about innovation tourism or wanting to merely appear innovative by changing some things around operationally. When banks set up innovation labs, many feign a move-fast-and-break-things mentality but wind up separate from the bank’s core business.

“We’re not an innovation lab that comes up with an interesting idea that never goes anywhere,” Gipson said. He said Innovation labs “never connect back to the core operations. If you really wanna drive change, you need enough of your operational functions to drive change in. Otherwise you’re just an annoying addition that doesn’t add value.”

On Gipson’s innovation team, just about 10 percent contribute ideas. Most of the leadership in innovation is focused on strategy and problem solving. But even with the high employee engagement and participation rates, USAA is constantly looking for new talent, chasing thousands of employees — and he needs to get each new one trained on innovation.

“We have a three-day new employee onboarding program,” he said. “Part of it is just sharing with employees right when they start at USAA: part of why you’re here is we do things differently and here’s an avenue through which — regardless of your role — you can share an idea on how to make this place better.”

Celebrating the spirit of innovation is a big part of the culture too, he added. Across USAA’s six campuses, it holds celebratory lunches and events throughout the year to recognize employee innovation — people who originated the most ideas, the best ideas, those who championed ideas, those who executed them. Gipson wants to recognize all the different roles that participate, and have fun, he said.

USAA has a longstanding reputation for digital innovation — it was one of the first banks to get into mobile check deposit and online banking, for example. It makes perfect sense, since for most of the time since it got its banking license in 1983 it has operated without much of a branch presence; customers would call the bank to make transactions. It began building and expanding a physical branch network in 2009 but last year said it would close 17 of its 21 locations, citing customers’ preference for digital channels.

But being largely branchless is why USAA for so long has been able to differentiate through its commitment to service and relationship building — not products, accounts or deposits — an attitude most household bank names have just adopted in the last two years.

“I love the age of focus on your customers but it’s your employees that take care of your customers, who are either on the phone or creating the experience themselves. Those things can co-exist,” he said.

According to Great Places to Work, a research firm and work culture certifier, 91 percent of 1,256 USAA employees surveyed this September say their workplace is great — it has challenges, atmosphere, rewards, communication and bosses. The bank gets high marks for its 8 percent 401(k) match, six weeks of vacation and flexible scheduling, according to Forbes which ranked it number 35 on its Best  Companies to Work For in 2017 list.

Even though USAA customers are open to embracing digital channels and new digital features at a much higher rate than the average U.S. consumer — “we have no branches, so they have to,” Gipson quipped — they still pick up the phone and call the bank. To USAA, being innovative means finding new and effective ways to maintain that human care empathy in different, digital ways. To do that, the bank needs to be just as dedicated to the employee experience.

“Take care of your employees. What you do to them they’ll somehow turn around and do to your customers,” Gipson said.

0 comments on “‘Innovation labs never connect back’: How USAA is building innovation into its core”