How financial media firms are monetizing as readership changes Financial media, like media in general, finds itself in a post-periodical era. Traditional publications have seen their influence decrease as media has become nosier and readers require more authenticity from publishers. While it’s challenging to run a media company in an environment like this, some larger publications like the FT and WSJ have generally rejiggered their businesses for the modern era. 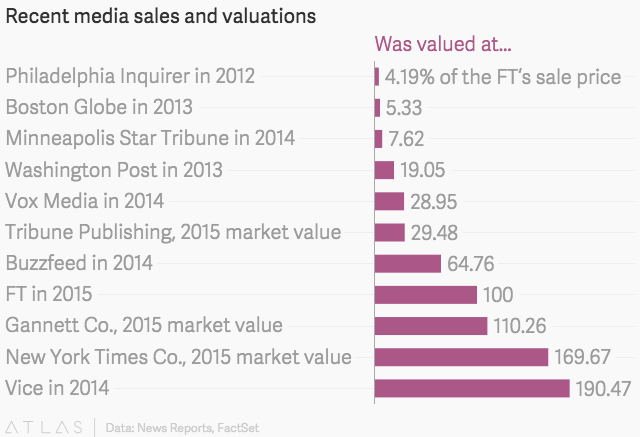 This transition from old media to new media has been played out in the public and M&A markets. Today’s markets reward companies like 7-year old Business Insider, which recently sold to Germany’s Axel Springer for over $400 million. Compare that to the price fetched ($1.2 billion) by the venerable Financial Times when it was acquired last year by Japan’s Nikkei. The FT was launched in 1888. BI built its following not on breaking news, like the FT does, but on overlaying a brief analytical layer to help its readers make sense of the news. And BI gets you to click on their stories (and not the FT’s) by employing eye-catching headlines.

For its part, the WSJ, a Dow Jones property and owned by News Corp, has developed its digital presence to rival its print. That meant creating new products and in some way, developing an entirely new audience. The WSJ continues to experiment with new social channels, was the first financial publisher to appear on Snapchat, and recently announced that messaging app, Line, has been its fasting growing channel, reaching over 2 million followers.

But as it’s become harder to support a traditional journalism-led content team, in its place have risen more niche, Internet-native publications. The same is true in financial media. In an environment that values both quantity and quality of content, niche sites can be more nimble, creative, and communicative — an advantage over larger, incumbent media companies.

“Niche content and the websites that create it are gaining traction versus mainstream financial media,” explained Nikesh Desai, founder and CEO of InvestingChannel, a speciality advertising network for financial publishers. “The ability to have an open dialogue with a community beyond the standard social stuff like Twitter is also very different.” That’s Business Insider’s flashy articles and busy comment sections versus the button-down FT.

Content is still king, according to Desai, when it comes to the DNA required to grow a successful financial media company. But today’s content is also changing — it’s a different animal. It requires a mix of form factors and creative display to make content engaging for today’s readers. Desai says that content should be “snackable” — brief, easy-to-consume content that readers can read on the fly and are happy to share with their networks. Financial publishers are employing more and more infographics, video, and other engagement tools, like surveys made popular by millennial content platform, PlayBuzz.

Creating content that works on today’s newsreaders and social media channels requires shuffling the chairs around in a newsroom and hiring for different skillsets. Today’s successful financial media firms don’t wall-off their journalists from the rest of the organization. “You need a data and technology team that sits right next to editorial; an advertising team that sits next to a UI team. We’ve seen what BuzzFeed, Vox, Mic and others are able to do when mixing content, social, data, and technology together,” Desai told Tradestreaming. In finance, he cites Bloomberg, Business Insider, and StockTwits as doing a relatively good job adapting to the demands of Internet readers. But the road is still long and the opportunity to emerge in a leadership position in financial content is still great.

Forbes described how its restructured its newsroom to make it more Internet-friendly. As content platforms are increasingly using data to underscore their content, advertising networks are looking to data, as well, to support their clients. Financial publishers are turning to companies like InvestingChannel and Chartbeat to help them understand their audiences better and create content that’s truly engaging. It’s happening more and more in real time and this sensitivity to readership also means advertisers can richer targeting options.

Today’s financial publishers demand it. “2016 is the year of data for us,” Desai said. “This means data to make our core network business smarter in terms of targeting, optimization, as well as to create new ad products and efficiencies for our business. We’re also using data as a way to scale into the exchange to find valuable audiences anywhere on the web. Lastly, data is helping us create content and build audiences.”